This is an essay from my weekly newsletter, which you can read in full here and subscribe to here.

Last week I read this remarkable story about how a new author tweeted something petty and nasty about a Metro worker in D.C., elicited a public backlash characterizing her as racist, and then had a distributor of her debut novel cut off ties with her, all in a matter of hours. And all I can say is: a pox on all your houses.

Here’s a rundown of what happened, via the Washington Post:

On the morning of May 10, the World Bank communications officer and mother of three tweeted a photo of a black female Metro worker who was breaking the D.C. region transportation agency’s rules by eating breakfast on a train.

“When you’re on your morning commute & see @wmata employee in UNIFORM eating on the train,” Tynes tweeted. “I thought we were not allowed to eat on the train. This is unacceptable. Hope @wmata responds,” she wrote.

By 10 a.m., less than 30 minutes later, Tynes had deleted the post and apologized for the “short-lived expression of frustration,” according to court documents. But the fuse of public outrage [over the idea that the tweet was inappropriate and racially charged] and ostracism had already ignited.

Tynes took the additional step of contacting the agency to ensure the employee would not be disciplined (and the complaint notes that no action was ever taken against the transit worker). Then, she spoke to [publishing house] Rare Bird executive Robert Jason Peterson and explained that, “having not grown up in the United States, the issue of race had not even occurred to her when she made the tweet.”

Peterson, the filings said, reassured the writer and told her he did not blame her. “You’ll get through this, we’ve got your back,” he allegedly said to Tynes just before noon.

Hours later, Rare Bird released a statement, calling Tynes’s tweet — which it described as the policing of a black woman‘s body — “something truly horrible.”

As The Washington Post previously reported, in response to the tweet, Rare Bird announced it had decided not to distribute her book. “We think this is unacceptable and have no desire to be involved with anyone who thinks it’s acceptable to jeopardize a person’s safety and employment in this way,” the company announced on Twitter.

By the following day, the publisher had announced plans to halt shipments of the book and postpone the publication date while taking the “appropriate next steps to officially cancel the book’s publication.” Preorders for the novel were also canceled, even though sales had skyrocketed, court documents say.

The reporting on this has been a little bit confusing, but it appears that there are two publishing houses involved. Rare Bird Books had plans to distribute her book and has canceled them. And a Rare Bird’s imprint, California Coldblood, initially took steps to cancel the publication of the book altogether, but eventually said it will be going ahead with publishing it “due to contractual obligations.”

Tynes, a Jordanian-American immigrant, is now suing Rare Birds for violating her contract. But plenty of people thinks she deserves what happened to her for giving the Metro worker a hard time.

I think both the author and the publishers were in the wrong, and that the critics celebrating the author’s struggle to get her book out are perpetuating the very culture they decried when she harassed the Metro worker.

Tynes was a snitch. And a particularly galling one at that. The trains on the Metro are exceptionally clean, and most everybody respects the rules prohibiting eating and drinking on them. It is rare to see people eating full meals on the train — that is to say, there isn’t a real problem that needs to be brought to the attention of the authorities. If I were to encounter a Metro worker eating on the train, I would assume that they have good reason to be openly transgressing the rules of their own organization, particularly since it’s not a pleasant place to eat. Indeed, the Metro workers’ union said in a statement that bus operators like her have an average of 20 minutes to eat and get to their next access point when taking a break, and most don’t have a sanitary place to eat due to “rodents and insects in the system and a lack of break rooms at some stations.”

Tynes took it upon herself to not only confront the woman, but then tweet a photo of her calling for the Metro Washington Metropolitan Area Transit Authority to take note of the situation and, presumably, take some kind of action that may include punishing her. 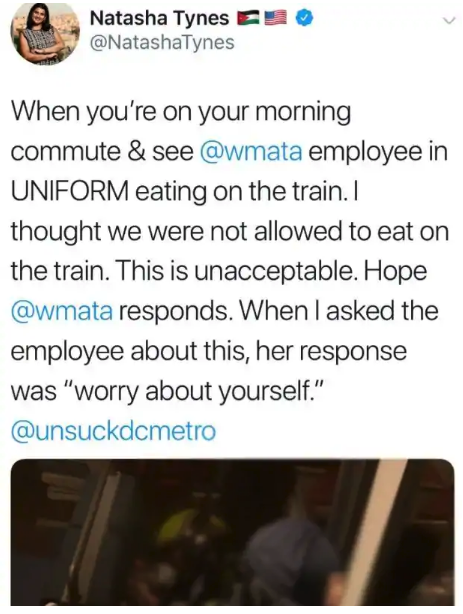 I’d say at best this was a massive overreaction, and at worst there was a kind of fascistic sadism in trying to possibly get someone fired over a minor infraction.

Is Tynes racist? I don’t know. Was her tweet racist? I’m going go with no — or rather, it can’t be proven to be so. Tynes could plausibly have done this with a worker of another race. The surveilling going on here isn’t about questioning someone’s right to a space or calling the police on someone — it’s an accusation of hypocrisy and organizational impropriety. Tynes’ action raises questions about racial hierarchies between professionals and service workers in a rapidly gentrifying city, but the existence of a credible non-racialized explanation for the action means it cannot simply be reduced to that dynamic. Finally, just because Tynes’ power was compounded by racial and socioeconomic inequity does not mean they were fueled by racial prejudice. People are not free to choose only the explanations that satisfy their urge to bring out the guillotine.

Twitter critics swarmed and lashed out at Tynes’ unseemly behavior, and many accused her of racism. That prompted her to quickly delete the tweet, apologize, and reach out to WMATA to ensure the worker wasn’t disciplined. Some of the backlash included racist attacks and death threats against Tynes.

Tynes’ attempts to make amends were not satisfying to her publishers. Rare Bird tweeted that Tynes did something “truly horrible,” explained that black women face “constant policing,” and declared it had “no desire to be involved with anyone who think it’s acceptable to jeopardize a person’s safety and employment in this way.” California Coldblood said, “We do not condone her actions and hope Natasha learns from this experience that black women feel the effects of systematic racism the most and that we have to be allies, not oppressors.”

On top of all this, Tynes is now arguing in a $13 million lawsuit claiming that her publisher defamed her and subjecting “an immigrant woman of color to … racial torment for their own personal profit.”

The whole thing is dizzying. The cascading thirst for punishment, from Tynes to her online critics to the publishers. The pantomiming of propriety. The universal conviction that one is fit to instantly play judge, jury and executioner. The speed with which actors adopt positions based on what’s considered woke for the day. The shameless attempts to profit from the discourse surrounding racism and antiracism.

I am particularly alarmed by the desire people have to interfere with each other’s livelihoods. In a capitalist economy, particularly one that isn’t softened by a proper social safety net, it can be an actual death sentence to push someone into unemployment. The fact that Tynes would deliberately try to shame and punish the Metro worker, and possibly have her lose her job, is perverse. The way the publishers sought to instantly cut ties with and condemn Tynes for a “problematic” incident unrelated to their business relationship — and something that she had instantly sought to correct — is bewildering to me. (That’s to say nothing of the fact that you’d think that people in the business of books would appreciate the idea of handling the issue slowly and deliberately.)

The whole thing brought to mind a classic angry blog post by the writer Freddie deBoer (himself a Canceled man in some quarters):

The woke world is a world of snitches, informants, rats. Go to any space concerned with social justice and what will you find? Endless surveillance. Everybody is to be judged. Everyone is under suspicion. Everything you say is to be scoured, picked over, analyzed for any possible offense. Everyone’s a detective in the Division of Problematics, and they walk the beat 24/7. You search and search for someone Bad doing Bad Things, finding ways to indict writers and artists and ordinary people for something, anything. That movie that got popular? Give me a few hours and 800 words. I’ll get you your indictments. That’s what liberalism is, now — the search for baddies doing bad things, like little offense archaeologists, digging deeper and deeper to find out who’s Good and who’s Bad…

I read about the PWR BTTM accusations. They’re disturbing. I take them seriously. But these guys have had their careers erased overnight, and the idea that we have any responsibility to give them the chance to defend themselves is treated like you took part in their alleged crimes. You simply cannot say, in polite society, “basic fairness requires us to avoid a rush to judgment and to give people the right to respond to accusations.” To do so gets you lumped in with the criminals. Like a friend of mine said, “the only acceptable reaction to an accusation is enthusiastic and unqualified acceptance.” I don’t know how people can simultaneously talk about prison abolition and restoring the idea of forgiveness to literal criminal justice and at the same time turn the entire social world into a kangaroo court system. Like I wrote once, we can’t simultaneously be a movement based on rehabilitation and restorative justice AND a viciously judgmental moral aristocracy. You know who thinks everybody’s guilty until proven innocent? Cops. You know who thinks people don’t deserve the right to defend themselves? Cops. You know who says those who defend basic fairness and due process are as bad as criminals themselves? Cops

I don’t agree with everything deBoer writes in the essay, but I believe the gist of it is right.

What a strange place we’ve come to, where arguing for silence, for ambivalence, and for nuance has become a polemical position.

This is an essay from my weekly newsletter, which you can read in full here and subscribe to here.

View all posts by Zeeshan Aleem